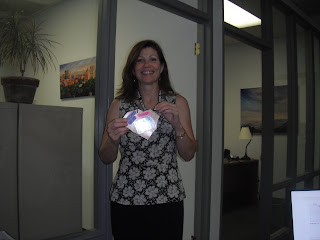 Multiple activities packed in to a 3-day weekend have this post reading more like a Holiday weekend review than a race report. However, when Charles suggested a side trip to a gem mine, I jumped at the chance to learn more about this rockhounding hobby of his.

Everyone knows I'm a lover of adventures big and small, so the prospect of 3 days filled with camping, cooking, gem mining, and a 50 Mile ultra trail race made me happier than Cheech & Chong on a Jamaican vacation.

Friday: The Adventure Begins
I headed down to Parson's Mountain Recreation Center in Abbeville, SC on Friday night, hoping to set up camp before dark. I almost made it, too, save for the need to hunt down some firewood*. Apparently, firewood for sale is one of those things you only see when you don't actually need it.

Figuring I had a better chance to find it nearer the campsite, I stopped at a convenience store with a kind of "Dukes of Hazzard" meets "Handy Mart" theme going on. I asked the nice guy behind the big wooden counter if they had firewood for sale, and was not surprised when he said no. But then he says he knows a guy about a 1/4 mile down the road that usually has firewood for sale. He picks up his phone and calls the guy! Then, he jumps over the big wooden counter and tells his assistant that he'll be right back- he's going to show me the way. Dang! People in South Carolina are niiiice!

So I follow this guy down the road thinking if things don't look right when we get there I'll just keep driving. Soon, convenience store guy pulls over in front of a trailer and bangs on the door. Eventually, "T. Rex" the firewood selling guy comes out, drunk as, well a guy named T. Rex on a Friday night, and loads my car up with primo firewood. No charge! Although he did ask me several tims if I were married.
I rolled into camp about 9:00 p.m, found a nice secluded campsite, set up camp and waited for Charles to arrive.

Saturday: Diamond Hill Mine
After sleeping in, we enjoyed a great breakfast cooked over the campfire. We headed out about 20 miles northeast to the town of Antreville, SC to Diamond Hill (Mine). The Diamond Hill, LLC owns the Diamond Hill quartz digging area and with prior permission, visitors are allowed to enter the Property and search/dig for rocks and crystals.
I had no idea what to expect. But after we arrived we got the lay of the land and spoke with a few people about where to look for gems. We just started looking around, and before we knew it, we were actually finding treasures. I can't explain the thrill of finding something bright and shiny. It's very fun and very addictive. I saw the attraction immediately!
Look at how much fun the kids are having playing in the dirt: 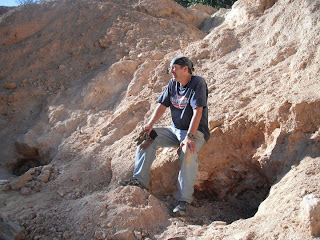 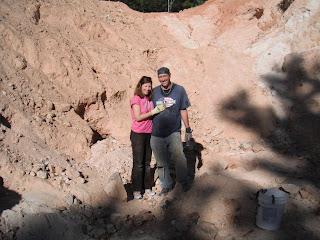 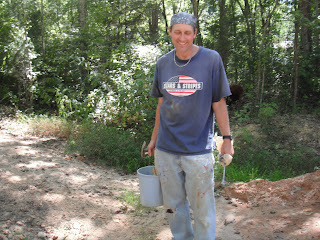 Certainly a day of gem mining wouldn't tire us out too much to run a mere 50 miles.. 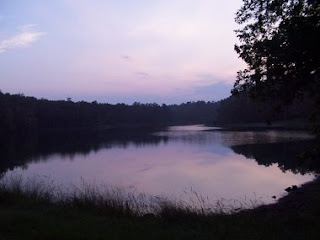 From our campsite, we walked the 3/4 of a mile to the start of the race. I noticed the air was cool, the leaves were just starting to turn, the lake was beautiful in the morning mist, and some clouds dotted the sky creating patterns of light and shadow across the landscape. "Ah, yes," I thought, "a perfect day for trail running."

It was fabulous to see old friends again, even if only for a minute. I always look forward to the brief pre-race time just for this reason.
Hello's and hugs went out to the usual suspects: Jason R., Jason S., Dan Hartley, Chad Henderson, Byron Backer, Dave Pryor, Terry Foxworth, Denise Davis, Scott Hadukovich, Lester Farmer, and many, many more. 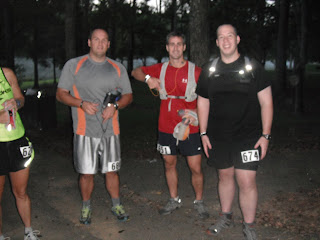 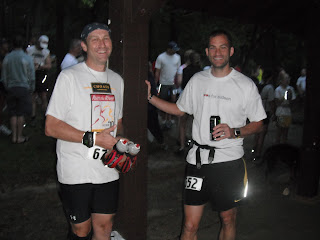 I was especially thrilled to be reunited with Jim Plant and Rebecca, who I ran with for the final miles at Enoree Passage. Meeting Greta Dobe for the first time was also a highlight of the day. 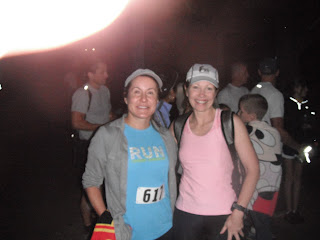 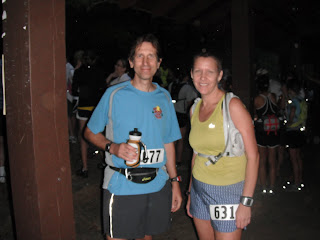 Soon enough, we were gathering for Terri's pre-race talk. Basically, the course consisted of two loops around the Long Cane Horse Trail, but runners had to extend the first loop with two crossings along a middle trail in the middle of the loop. The first 32 miles of the course were run in a figure-8 pattern by crossing the middle loop once before circling the top end of the loop and circling back to the start on the opposite trail.
However, Terri's instructions had my head swimming in visions of high school math problems (A is to B is to C as 4 is to...wtf?). 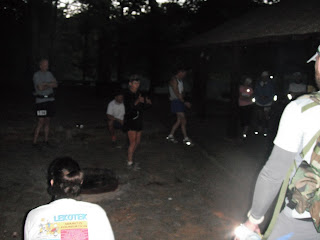 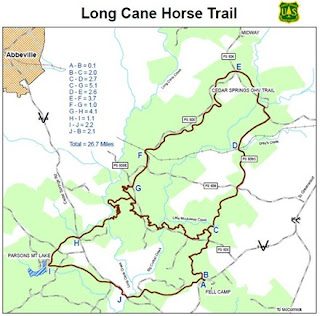 At 7:00 a.m. we were sent on our way.
The first memorable moment I had was seeing Jim Plant, who I had not seen since Enoree Passage. He greets me with, "I see you've been emracing your midlife crisis, Psyche." Hahahaha! What a great way to start the run!
Possibly my favorite moment, though came about 41/2 miles in. Suddenly the trail was not marked and you could clearly go left OR right. About 8 of us all stopped, gathered around and discussed the possibilities. Classic! I love this picture: 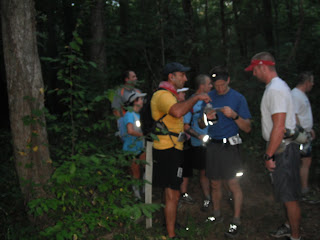 One thing that was unusual about this race is that I felt pretty bad for the first 30 miles. My legs were achy, and I felt like it just wasn't my day. On the other hand, Charleswas feeling great, and had this been a 50K, he would've burned up the course. Just when I had given up hope of things turning around, they did, though. I came out of it and actually felt pretty good. So, of course, right about that time, Charles started going downhill. It was an interesting experience and one that I think will repeat itself, in that we seem to be going through opposite stages, but the upside is that we bring the other one along when they aren't feeling good. It's kind of nice.
Many, many miles later it became apparent that the course was going to be way long. At long last, though, we emerged from the trail to see Terri and Jim Plant and two other volunteers waiting for us at the dark pavilion picnic table area. Terri cheered us on as we walked to the picnic table and sat down.
We finished a distance of roughly 57 miles or so in about 15 hours, even if the last 5-7 miles weren't much more than a power walk. 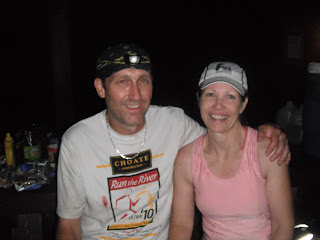 Thanks for another great race and great adventure, Terri.
See you on the Trails soon!

* Because if you, too, were camping for the Chattooga 50K you know what a drag it is to have wood that will not burn. Or matches that will not light. Or feet that will not stay on trail.
Posted by Psyche at 11:44 PM 15 comments: