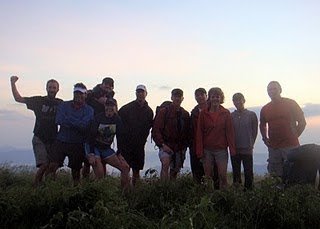 The 4th Annual Roan Adventure Marathon (RAM) came and went, leaving in its wake many a happy (and sore!) camper. Thank you Sultan for putting together this awesome run.

A description of the course: The start of this run is at the top of Carver's Gap/ Round Bald. You leave Carver's Gap (5512 feet) and run all the way down to 19E all along the AT. Once you reach 19E then you turn around and head back uphill for 13.6 miles back to Carver's Gap. It's a difficult 28 mile out and back section of the AT. The terrain is technical and steep, yet the views are expansive and very rewarding.

Here's how it all unfolded: 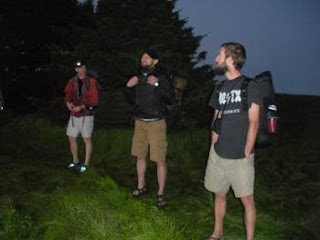 I rode up to Carver's Gap on Friday night with Dave Pryor, Adam Hill and Jeremy Hargroves. We arrived around 7:45 and made the short hike to set up camp on Round Bald. It was still light enough to see the incredible 360 degree view.
After much socializing, we went to sleep around 11:00. At about 2:00 a.m. I began to hear the incesant flapping of my tent in the wind. Somewhere in the recesses of my mind I remember Adam helping me with my borrowed tent, and saying something about..."before you tie down the outsides." Oh! Tie down the sides...
In the morning we were greeted by the prettiest sunsrise ever. The 360 degree view was astounding. The colors, along with the layering of the mountains was just a beautiful site to behold. 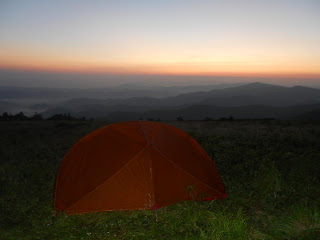 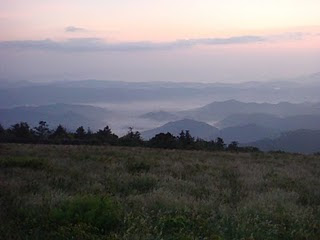 We met the runners who did not camp the night before sown in the parking lot. Before I knew it, we were off and running.

My premier thought was: don't fuck up!* I was doing my best to find that happy medium of not going out too fast while at the same time keeping someone - anyone! - in my sights so as to not get lost.

Pretty soon I settled in behind David Petroski, who has run this course 4 times before. Man, was I grateful for him! There's a big, windy climb fairly early on. It seems like you're done climbing, but then a short turn later, you find yourself on an even steeper hill. It was nice to have David there to say things like, "Don't even bother to start running again. It turns into a bigger hill right around the corner." I started thinking of David as my tour guide... 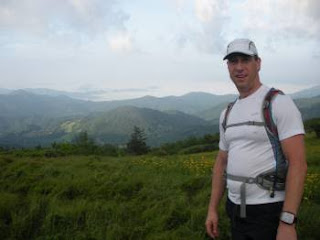 As we made out way down to 19E I really tried to keep myself from focusing on the fact that all the downhill would become uphill on the way back. Just stay in the moment, I told myself.

After a while, we came to a stretch that was the most technical trail I've ever been on. It lasted for a very long time, and was literally a rock and root climb. Usually, I find this kind of thing fun, but it loses some of its appeal when it goes on for far too long...And again, it was hard not to think about coming back up that stretch. This is where I remember Paul Geist joining us.
At the final approach to 19E, we began to see the first runners coming back, including Sultan, Adam, Jeremy and Mike. Adam stopped to chat for a minute, and we were visited by a very pretty black snake. Awwww... 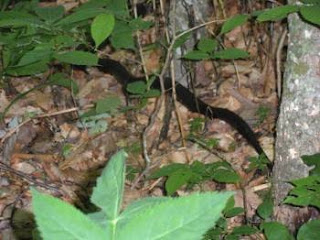 I got into a nice groove here, where running felt effortless, and I was just soaking in the beauty around me, not a thought in my head. Suddenly, I find the Spider Pig song running over and over in my head! Where'd THAT come from?? Spider Pig, Spider Pig. Does whatever a Spider Pig does. Can he swing? No he can't. He's a Spider Pig. LOOKOOUUT!!! 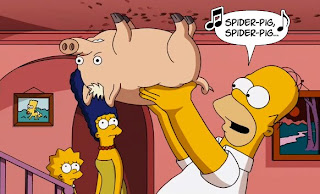 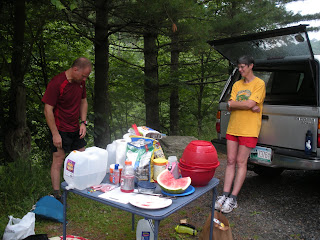 Finally - The aid station at 19E!
Thank you Gail, for the wonderful job you did here. The watermelon was excellent, and it was good to get my pack off my back for a couple of minutes. This was the first time I used the bladder in the pack, and I found out that I hate it. It sits very differently than when I carry my hand helds in it.
As we rested a few minutes before facing Part II, it rained big, fat raindrops on us. It was pretty cool.
Then we began Part II. The climb.

Man, the way back was hard. Words don't do it justice. It felt like the climb never ended. And when it did, it seemed to be in a too-steep technical downhill that I was forced to walk because my knee would start hurting. I swear, at one point, I felt pretty demoralized when I realized I was walking both the uphill AND the downhill!
The hill before Jane's Bald was the worst. I really had a mental breakdown here. The long uphill switchbacks would...just...not...end. I was walking. I came to a point where I didn't think I could walk another step - and then I'd turn the corner and see that the trail kept on climbing. I must have repeated this scenario 20 times.
My Garmin died here. I thought I was next.
David's ankle had started to really bother him, so I had gone on ahead. Paul had already gone on ahead of both of us. So I was alone in a never ending climb from Hell.

But end it did. And just when I thought there was a good chance that I was going to remember this run as a terrible experience, I began to feel really good. I would come to fairly flat stretches of trail and it was heaven to run them. I still had to walk the steep downhills, but I was moving good now. At Jane's Bald, I caught up with Paul. 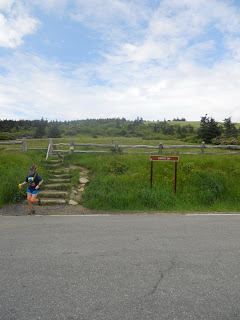 For a moment, I thought he was going to tell me I was only at Mile 22 and that whole climb had been less than a mile. That would so mess with me. But he said the finish was just over Jane's Bald. Woo Hoo!! 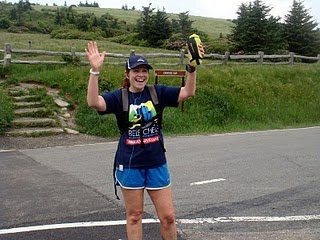 I ran in as hard as my body would allow, and I felt fantastic at the finish! I think Adam said it looked like I was flying down the road at about 6 minute pace. All I knew was that it felt good to run, not climb!

* After Chattooga, if I were to get LOST again Charles and Co. would never let me live it down!
Posted by Psyche at 8:34 AM