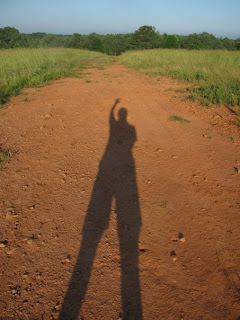 Wherein I get slapped around a bit by a trail with a sweet name and a bad reputation and I live to tell the tale.

SweetH20 50K starts a series of races (including Enoree Passage 40-Mile and the Foothills Trail Ultra 77-Mile) that are very special to me on a number of fronts.

This time last year, I sat here reading Georgia Snail's 2010 SweetH20 50K race report. This is back when we were just "blogger friends". I had been following his blog and knew of his plan to run this event as his first ultra. His race report, full of horrible recountings of pain and suffering beyond anything he had ever experienced, had me at hello.

Shortly thereafter, I found a 40-Mile race and e-mailed a guy named Jason Sullivan to ask him if he thought it was a good "first ultra" race... the rest is history.

A year later, I sit here writing my own SweetH20 race report, and I'm finding it ironic that Thomas' race report from last year and my race report from this year are pretty much interchangeable. In fact, I don't really feel like recounting Saturday's misery. Can't you just go read his report and insert "Psyche" every time you read "I"?

SweetH20 50K Race Report
Like everyone else, I've grown tired of winter and find the recent warm temperatures bring with them a bit of spring fever. Being out on the trails in the sunshine and among the wildflowers is apparently enough to set off a virtual epidemic of race fever, as the week before SweetH20 generated enough trash talk to get every runner within a 100-mile radius seriously stoked to run. Get Christian involved and make that 300 miles.

With all the smack talk, people were laying down goal times right and left. I signed up with a 7:30 goal based on the pace I ran for MMM, assuming the courses were somewhat comparable. This meant keeping it slightly under 14-minute miles.

So after months and months of hardly any preparation at all, race day finally approached. This would be Charles' 3rd trip to the 'Creek, and my first. Our no-plan-plan was to stay together for one loop and then see what happens.

The morning of the race worked out perfectly. It was about a 45 minute drive to Sweetwater State Park, and we had plenty of time to catch up with old friends. We ran in to Thomas first, and boy, did he look good! If you haven't noticed, the Snail has been dropping some serious el bees lately, and he looked like a lean, mean racing machine on Saturday.

There were about 200 runners casually standing around at the start of the race waiting for the 7:30 a.m. start. As I looked around, I was amazed that I knew so many people. We spent a few minutes catching up with Big Easy, Diesel, Weezy, and a few people with regular names, too. Brad Goodridge and Charles got to compare some serious scarrage, which is always a boost for a Pirate. Ronnie Hines came around taking pictures, which made me realize I had forgotten to bring my camera. 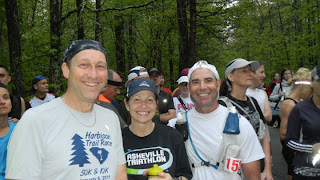 A few words later from the RD, and we found out that the creek crossing that the race is famous for was being removed due to the heavy storms from the night before. I didn't hear what course change that required, but before I knew it we were off and running down the road, out of the state park, going around the lake.

People were flying down the road!! I think Charles went through Mile 1 in 8:45 and I was not far behind at 9:10- a far cry from the 13:55 pace I should have started at. I remember thinking, "What am I doing? I should not be running the first of 32 miles at a pace that actually has me breathing hard." I also remember wondering in what universe is 14-minute mile pace "race pace"? You would think ultras would draw hordes of people purely because they would believe they could run faster than that over long distances. Some would actually be right.

The course layout was simple, a 15 mile loop that we traveled twice. I took Christian's advice to heart. He said, "Get through the first trip to TOTW and powerlines happy, and all should be well. Feel dead, and the day will be long 'cuz you'll still have the following brutality left: 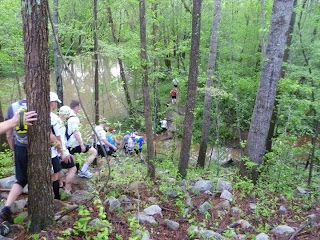 After some very technical single track, the first "water" crossing came up quickly. There's a concrete spillway about 50 yards across, with a couple of ten foot ropes that we used to sort of rappel down the wall, run through the six inch deep water and pull ourselves up the same set up on the other side. Pretty cool. 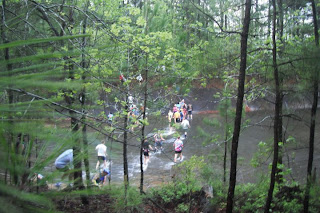 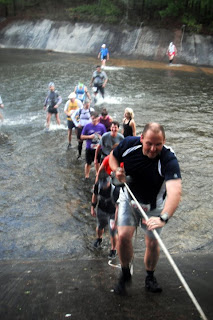 Big Easy is making it look, well, easy
Continuing on, we were now running along the banks of Sweetwater Creek. I hit a root and took a pretty decent fall. As I was getting up, I saw Naresh! He seemed to appear out of nowhere, which is a scene that would repeat itself throughout the day. Naresh is a very sneaky runner.

We soon began the gradual ascent up the bluff, single-track switchbacks. Charles, Naresh and I were running together, the mood was light, we were joking and enjoying the camaraderie. 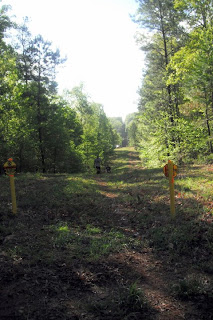 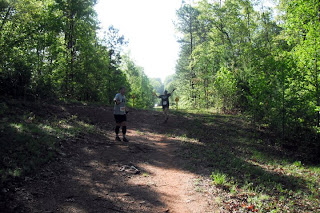 Around mile 5, we began to leave the creek behind and worked our way to the power lines and the entrance to the "Top of The World". There were at least five major climbs in this section, each becoming more difficult. We ascended a couple hundred feet in each 1/4 mile and then we were on Top of the World where pictures cannot due justice the 360 panoramic view. It is spectacular. 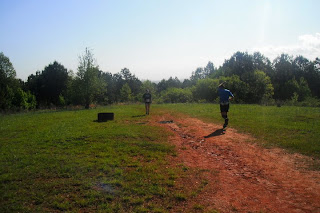 The descents were tough, my quads were burning and my toes were throbbing from being jammed into the front of the toebox of my shoes.

Miles 14-16 (?) found us rolling through the flattest portion of the course, and then suddenly I was staring down (up) a trail that would almost bring me to my knees. In 3/4 of a mile we climbed 400 ft, only to descend 400 feet in the same breath. While walking up this hill, I thought my heart was going to explode. I had to stop to catch my breath several times, and Charles ran ahead, seeming to climb effortlessly. Damn him! Each single step was a chore, and I prayed I would not see this hill again. 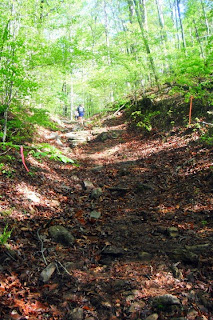 I hate this hill

We traveled along the creek bed for the next few miles and worked our way back to the entrance to Top of the World and the power line hills. The pain I felt at the climb back in mile 18 was nothing compared to the battle of wills I encountered between miles 25 - 27. Endless hills, each step bringing about greater pain. I "quit" each of my upcoming races 5 or 6 times during this stretch. I decided trail running was not for me. I tried desparately to just keep moving forward, but I could see the remaining hills at the top of each climb, taunting me. There were runners on those hills, and I could not imagine how they were doing it.
That second pass through the power lines seriously sucked. To compound thing, Charles was feeling good (ha! feeling good! Are you effing kidding me??) and said he was going to push it.

Arriving at the Top of the World, my mind was mush and I could only focus on the idea of getting off of that mountain. Pulling into the aid station I ate some oranges and just felt completely out of it.

The return trip down was a chore, and I spent a large portion of the time dissected my training and decided I was completely under trained for this event. In hindsight, I was strong through the first 21-22 miles, then the wheels fell off. I was revamping my training plan to include massive amounts of climbing, as there is no way in Hell I am suffering this bad at the Pitchell.

The last few miles were difficult, I walked most of them, running for short spurts on the downhills. I mentally checked out when I knew the finish would be ahead, and hopefully somewhere close. The road went on and on. When. will. this. end? Where is the finish?
Then I heard some cheers for someone behind me, and I glanced back to see it was a girl. There was no way in hell I was givingup one more spot with the finish line in sight. I started running and praying I was going to see the damn finish line- soon. Suddenly, someone is telling me to turn and go up the stairs, which just seemed surreal. Really...? I have to freaking climb stairs to get to the finish line? What is wrong with you people??
Finally I hit the stairs and everyone started cheering! I saw Charles as I crossed the finish line in 8:21:33, a full 23 minutes after him and Naresh (super duper congrats to them both for breaking 8hrs.)

Then Naresh was suddenly there taking my picture. 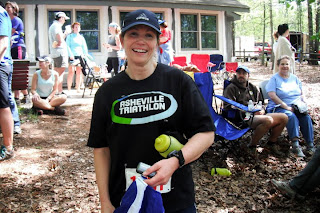 The mouth is smiling but the eyes are not so sure

I was given a sweetH20 hat, a bottle of water and directed to the food table. I felt dizzy and naseaus and even after throwing up it took me a long time to recover. 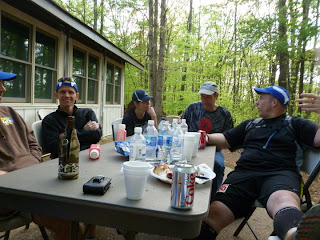 Congrats to everyone who PR'd this course, which was a ridiculously large number of people.

Thank you Douglas County Rogue Runners, Johnny Buice(RD) and every single volunteer that was out on the course for this event. Without you this day would not have been possible.

Thank you Holly Armbruster (again!) for taking care of me. You are the absolute best.
Posted by Psyche at 8:44 AM