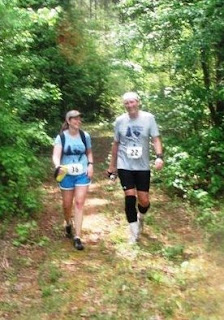 Wherein I celebrate my first anniversary of ultra running by going back to where it all began- a great little race called Enoree Passage 40 Mile Trail Race. As celebrations go, it was a blow out. As races go, not so much.

Part I:
Let's Get This Party Started! Charles and I wanted to do something special in honor of the race where we first met last year *. In the past, we've tried to get his two youngest (Devin and Alex) to come camp with us at key races, but it's never quite worked out. This time, however, Devin was able to make it, and it so happened that both of his older daughters (Paige and Lindsay) could also be there, along with Lindsay's husband Fletcher and their twin boys, Spencer and Logan. (Now, it's a party!)
So on Friday, Leopold and I drove down to the Brick House Camp Ground in Whitmire, SC in order to secure 2 side-by-side campsites. All week, I'd been dealing with flat tire issues, so it should not have surprised me when, as soon as we pulled in and were paying for the sites, Leopold comes up to me and says, "Mom, you better come hear this." I followed him over to my rear tire, only to hear the not-so-faint whisper of air whooshing out of my tire. "How have I offended ye, oh gods of Good Year?" I wondered.

I figured I'd call AAA the next day. There was (literally) nothing else to do, so Leopold and I set up camp, settled in, went for a little run, and goofed around until even the fascinating campfire fire no longer held our interest. 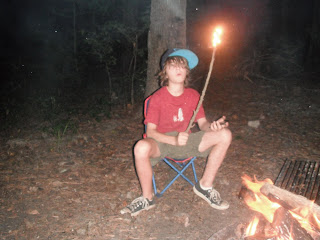 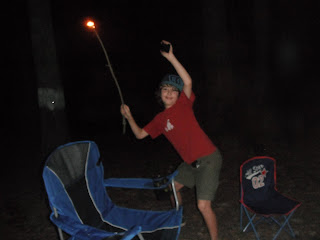 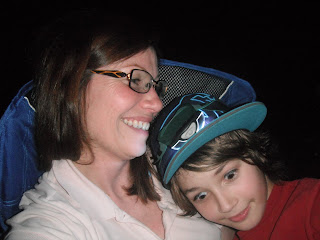 After a good night's sleep, Saturday greeted us with sunny, warm weather. I noticed it was about 5-10 degrees hotter than the day before. It felt great if you were in the shade, but I began sweating immediately in the open sun. [For those of you who need me to point this out- this is what's known as foreshadowing].

We eventually caught up with Terri Hayes and chatted about the course and how the race was coming together. I always look forward to seeing Terri -seeing Terri Hayes is how ultra runners know it's summer [again with the foreshadowing!]. Eventually, a few other people trickled in, including Denise Martin, volunteer extraordinnaire.

Jason Steinberg and Wendy Oates arrived while I was waiting for the AAA guy to arrive. They came down for a little run and to check out the course, but were not camping. The AAA guy got totally lost and Jason helped by giving him the GPS coordinates. Then the two of them were off, down the trail...

A bit later...Team Raffensperger/ Worley finally arrive! Yay!! Lindsay's twin sons Spencer and Logan are adorable and clearly they found Leopold irrisistable. It was a crack up to watch them interact with each other. Part puppy love, part Monte Python's Flying Circus. 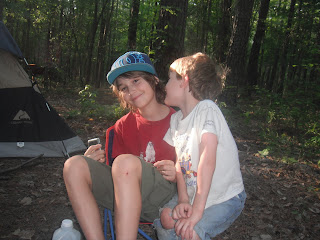 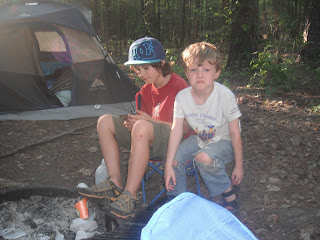 It was just a joy to hang out and play ball with the boys and Devin (who is an amazing natural athlete). We were all just relaxed and happy to be outside. Every once in a while we'd see a fellow runner and catch up with them. It was nice to see Jimbo again (who I shared some trail time with last year as well) and to meet his friend Connie. Later, Fletcher cooked us all some amazing burgers and we all enjoyed another camp fire. It was one of the best camping experiences I've ever had. Had this trip ended there, I would have been perfectly happy**. 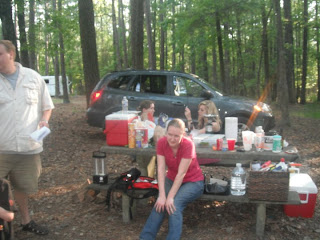 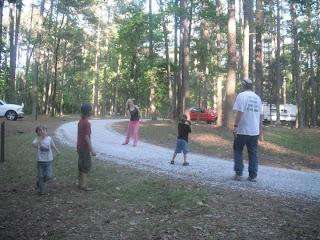 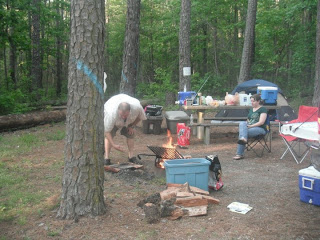 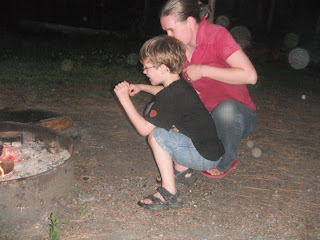 Part II: Pre-Race
We didn't have to get up too awfully early, as the race start was at 7:30 and we were literally just yards away from the starting line. As we got coffee, and readied ourselves, I grew excited as cars pulled in and I recognized old friends- Dan Hartley and fam, Jason Sullivan, Weezy, Mark Elson, Brian Guzik (The Guz), and a surprise visit by Scott and Greta. 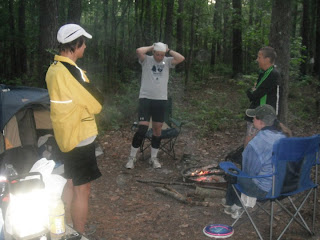 One of the best thing about these events is seeing all the people you've come to know over time. The sense of community among ultra runners is simply amazing. Absent is the sense of nervousness and foreboding that you fnd at most marathons- people here know the value of the run does not lie in your finishing time, but in your experience. In that sense, it's all good.

Part III: The Race
Enoree is a 20-mile out and back course. There's some moderate climbing, some moderately technical trails, but mainly it's flat and mainly runnable. It has a lot of unique features, and a cool lake at the turnaround point, too.

So, 7:30 approaches, and before I know it, we're all heading down the trail. I found myself running with Big Easy and the Library Lady for a few miles, but keeping Charles in sight. We had a few good laughs, and I was enjoying just being there as the memories of last year flooded back.
I had several nice moments where I remembered good times from the previous year- laughing with Sam and Big Easy about phantom race pains, talking with Jimbo about Magnum Track Club, running with Rebecca and Doug for the final miles. Good stuff.

After the initial few miles, I saw Scott and Greta- I didn't realize they were even out on the trail before this, but it was good to see them. That is, until Greta took a fall on the rocks. This is so what she did not need, with Massanutten 100 coming up. I stayed with her for a few minutes, watching as her knee swelled, and gave her some ibuprofen. They both told me to go on, so I did.

Just for a moment, I had a bad feeling. No people ahead of me...and no one behind me. Oh, dear god..please let me be able to stay on trail!! Getting lost is not the experience I want to have here today.

Luckily, I met up with Charles just a few minutes later. He was waiting patiently for my slow ass. Before I came up to him, though, I passed William and Kristin, another "ultra couple" who were running their longest distance to date. We all ended up running many miles together. They are a hoot. 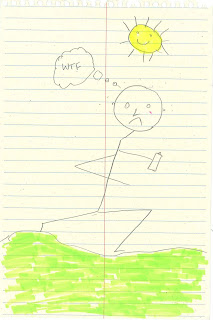 About 10 miles in, I knew I was in for a bad day. My legs were hurting, I felt overly fatigued, and I was going through 40 ounces of water between aid stations and still felt thirsty. Turns out, this would be my theme song until mile 25, where it finally became intolerable and (wisely) we called it a day.

From what I gather, many others experienced this same phenomenon, including my friend Jimbo (who's awesome rendering of his predicament is seen here).

It took me a while to see that dehydration was the problem, but once I did, I was fine with calling it a day. But I will say that now that I've experienced this phenomenon twice in a row, I'm not exactly jumping at the opportunity for another hot weather race. In fact, Big Easy and I both concluded that the May 21 Foothills Trail attempt should be postponed until September.

In conclusion, the best thing about this race this year(unfortunately) was EVERYTHING but the race! And I'm perfectly happy with that. I can always redeem myself next year, but I could never replace all the valuable friendships I've gained through this sport. I don’t have to mention names, but you all know who you are. I would come out and support each and every one of you even if I could not run at all. I am extremely inspired by you guys. Every single one of you are doing something magnificent. As am I. How cool is that?

So, to all of you I say “THANK YOU” so much. If I could give each and every one of you a hug I would. I would say “lets hug it out, bitches.”

* Technically, I did not "meet" Charles at this race. We were formally introduced at the Outkasts Run. But we shared a great trail moment at Enoree last year. As we were running through the forest, I told Charles (then a total stranger) that I thought it seemed like there should be houses "on the left". Apparently, I told that to the ONE other person in the universe who was experiencing the same thing at the same time.