This year was the 5th running of the Roan Adventure Marathon (RAM), an annual run hosted by Sultan. With the insane 2nd half climb and views from atop the Round, Jane, Grassy Ridge and Hump Mountain Balds, this 28-29 mile speed hike/ mountain run is fast becoming one my most favorite ultra’s of all time.

Planned around the rhodo blooming season, the pink shrub was in full bloom this year. Beautiful! The view from Roan Bald to Jane’s Bald was especially pink, as the rhodos were in bloom all along the mountain. 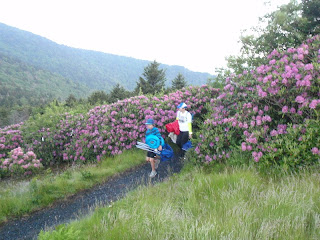 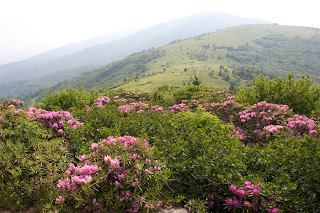 The Course/ Beat Down
The run starts at the top of Carvers Gap (5,512 feet) and is run downhill to Hwy 19E all along the AT. Once you reach 19E then you are thoroughly punished by retracing your path back to the start, which means climbing 6,000 feet uphill for 13.7 miles back to Carvers Gap. Try and negative split that one, yo! 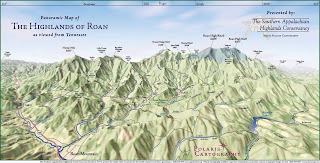 How It All Unfolded:
Leopold and I celebrated his last day of school by heading up to Carver's Gap late Friday afternoon. We expected a lot more people to turn out for camping, but the majority of people showed up for the run the next day.

We carried our gear up the mountain to pitch our tent, and I was surprised (and dismayed) to discover I was breathing so hard I had to keep taking rest breaks! Good lord, I thought, how am I going to handle that climb tomorrow if I can't even get up Roan Bald? (Later, I would feel a lot better when I watched Stan go through the same process).

Camping that night were Leopold and myself, Jeremy Hargroves, Haley and Damian Roper, Stan Austin, and Scott Williams. As it got dark, we all settled in for the treat that is camping on Roan Bald by enjoying some delicious hopstatic homebrew and good conversation. 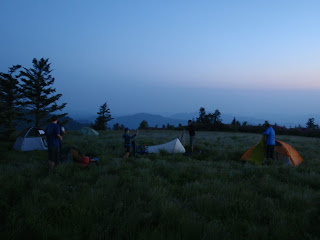 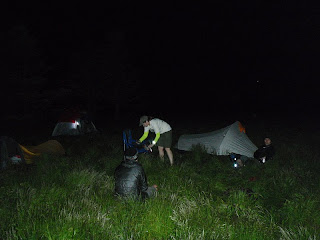 As we broke down camp in the morning, Sultan checked in with us to make sure we all knew what to expect and then we had some fun trying to get a "Sultan pose" for us campers. 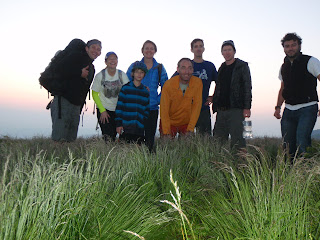 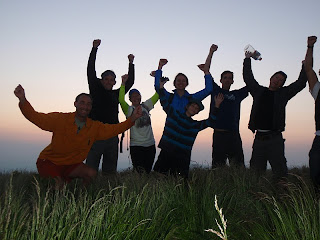 My plan for the run was to run with Leopold down to 19E, whereby he would be eventually shuttled back to Carver's Gap by Hayley, who was serving as our Aid Station (thank you, Hayley!). I was looking forward to taking it easy on the 1st half and trying to run a little harder on the way back. I hoped to beat my 2nd half time of 4:50 from last year. Part I: Carver's Gap to 19E
A lost runner, a bear, and an illusive rock.

I have to say it was a blast running with Leopold. It was a freaking hot day (like 80 degrees+) so Leopold and I kept a leisurely pace and traded off leading for the first part of the run.

Our first shot at getting lost came at the Grassy Ridge trail junction. Sure, there's a sign. And sure, the sign has an arrow pointing to the right for Grassy Ridge and to the left for the AT. 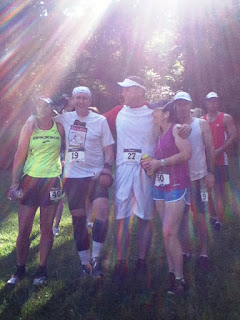 The Black Mountain Monster 12/24 Hour Race for Awesomeness (love the name) has come and gone, leaving in its wake the... race report of awesomeness: A clever, insightful, thought-provoking, tear-producing, monolithic testament to my running labors this weekend. You know, just how I want every post to be but I'm never able to invest enough time in writing so I just crank out my immediate thoughts and hope no one noticed the typo in paragraph three before I got a chance to fix it. (Don't bother checking, I already fized it.) At this point, if a few people snicker, sniffle, and shoe-up (yes, I did reach for the third "S") I'll be happy.

The Black Mountain Monster is a smaller event by design and feels more like a family get-together than a race. Montreat College is the perfect setting. It’s a beautiful campus with ample parking, bathroom and shower facilities, and a big field for everyone to set up their tents on. The premise of the race is simple: Run around in little 3-mile circles for either 12 or 24 hours. Participate individually, or as part of a team.

The course is a 5K loop that accesses the college’s x-country course, the greenway, and the sports complex. This course offers more variation of scenery and landscape than my moods and is a perfect combination of single track, flat wide grassy trail, a couple fields, and a little asphalt. The pictures from the race’s website illustrate the course perfectly: 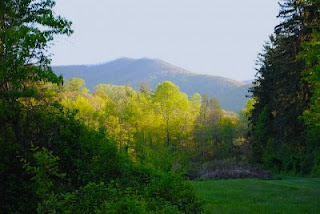 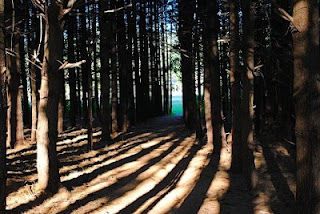 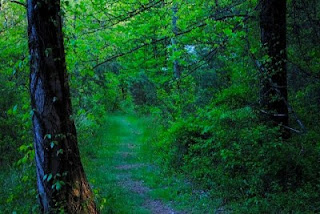 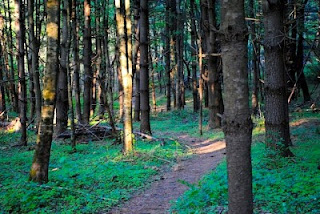 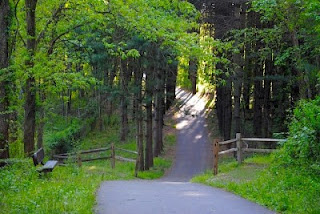 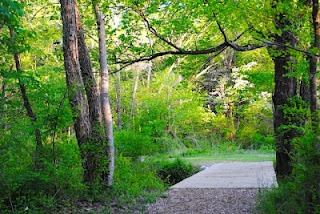 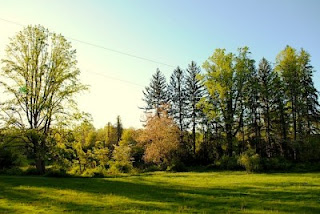 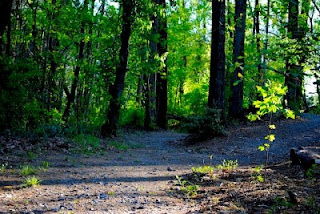 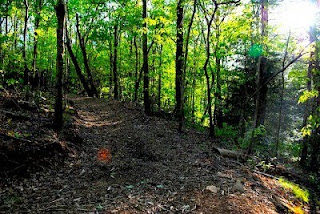 I was looking forward to this event as it 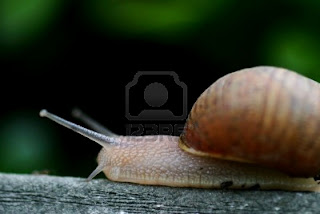 Loop 19 was bad. It was 3:30 or 4:00 (?) in the morning and my feet hurt, I had blisters, my body wanted to stop, my mind wanted to stop, and I’m pretty sure my soul wanted to stop. I was reduced to the slow, weary, depressing yet determined walk of one who has nothing left except the impulse to simply soldier on.

I came upon Brad Goodridge near the end of this loop, and we walked together. I think I asked him how it was going. I don’t remember his exact words, but he was done (those may have been his exact words, actually). I completely know that feeling- where you are just done. You’ve had it, you’re over it, and every cell of your body screams, “Done!” He was there. We walked in together, and I was praying the lap counters would tell me I had just completed lap number 20, whereby I would promptly stop, vow never to run a 24 hour race again, and go to sleep. I myself was “done” and definitely quitting after the 100K mark. At this point, I felt there just wasn’t any point in getting any more miles.

I was not a happy camper when the (now evil) lap counters told me I had just completed lap #19. Damn!! I have to run at least one more 5K. I’m not even sure I stopped at the tent to see if Charles was there or not. I hardly remember anything at all about this loop. I’m just guessing here, but it was probably a death march of pain and my mind decided to check out for a while.

Coming in to finish loop 20 (100K) should have been a great experience. I say should’ve, because I was completely robbed of said experience. The (now evil and cunning) lap counters were messing with me again. As was Charles. As I checked in, and before I could say, “So long suckas, I am adiosed”, the (now evil demon) lap counters innocently proclaim, “Your boyfriend just checked in with us. He told us to tell you he went back out and that you better catch up”. I better catch up??? I better catch UP??? Muth#r Fuck#r!!! There is no way to explain the emotions that I felt in that moment, so I'll have Wiliam Tudyke do it for me:

As I headed out for loop 21, I walked a bit with Jason Rogers. He was in a bad way. He had reached the point where road kill feels sorry for you. The point when the vultures and crows will "pass" on your carcass and wait for something a little less dead. He had lapsed into some really negative self talk, so I knew he was in the Pit. The Pit is when your head is so full of reasons to stop, so many excuses piling up that you can barely acknowledge them (let alone answer them), that it feels like quicksand pulling you into a pit. It's all the reasons you aren't good good enough, all of your self-doubts that you have unwillingly stored in your memory banks. It's self-imposed mental torture. And it seriously sucks ass.

But then, a funny thing happens. You suddenly get tired of hearing all that bullshit and just push on through, to a serene and peaceful state, and your world is awash with possibilities. Then you realize the source of all of those excuses - it was you! Ha, ha!WTF! It was you all along!

Jason is my hero, and it was wonderful to see him pushing himself to this limit. The gift on the other side of the Pit is worth every bit of the pain- because on the other side you understand that the ability to create a strong, positive outlook lies within. It's the experience of the Pit that builds confidence. I believe it's what's behind the smiles of all ultrarunners, and it's is one of the reasons why I keep coming back - as Scott Dunlap says, "Gotta give those flowers more sunshine!"

Well, honestly, I am growing weary of writing this report! Let me just say this event was nothing short of inspirational and I was honored to be a part of this race. I spent time with my incredible son this weekend, spent time with some old friends and spent time making a few new ones.

So there you have it. A day spent running in circles in Back Mountain and a day that did nothing but inspire me. Charles and I left with 65 miles (21 5K's) and 60 miles (19 5K's), respectively. I met some great people and watched some amazing athletes (including my hero Jason Rogers) cross that finish line victorious.

I will leave you with a quote from Jason's write up of this event:

Darkness is all around when we are exhausted and we still have miles ahead, but morning eventually comes and sunlight will shine through the trees. Just keep moving and putting one foot in front of the other, because that is what awesomeness is all about.

* Matt is fastpacking the 900-mile Mountains-to-Sea Trail during the month of June. Follow the trek here: runthemst.wikispaces.com