The Blackhawk Boys Running Club made a fine showing on Sunday, competing in their Spring Season race, the first inaugural Run For The Hills 5K, held at Fletcher Community Park.
This was an afternoon race, which is becoming more and more common around here. The weather was perfect-breezy, high 70's, and beautiful. I arrived around 1:00 and first-time RD Aimee had everything organized for me. All of our race packets were in one box, and she even went as far as putting all our race numbers in a large envelope. On the front was a list of boys and their corresponding race number. It was awesome. As our boys showed up, we were able to get the 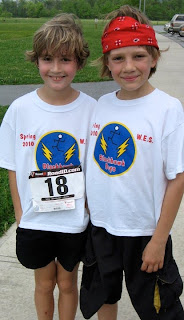 ir race number pinned on them, get them entered in the raffle, and ready run.
Also nice: we were afforded 8 complimentary race entries due to our fundraising. The Blackhawk Boys received 4 free entries, and David Keller (my boss and member of the CMLC Board of Directors) received 4 free entries, which he gave to us. This allowed us to enter several parents who wanted to run with their son.
As we lined up on the grass, the Blackhawk Boys toed the line, forming a sea of white T-Shirts. RD Aimee said, "GO!" and 2 of our little 5-year old mascots, Landon ("Peanut") and Adam, shot out to lead the race across the grassy field and on to the walking trail. They will be forever memorialized in the Asheville Citiziens Times Outdoor Section as leading the race.
I stuck with Leopold, as best I could. He went out strong and steady. After running around the large green field, we headedon to the walking path and hit Mile 1 in about 8:19. We settled in behind Robert- for the duration of the race as it turned out. The next section was an out-and-back 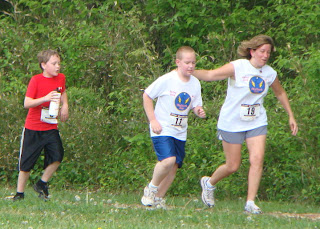 , and I got a little confused because I hadn't toured the course beforehand. For some reason, I assumed this next section would be a 1/2 mile out and back, and that we'd finish with another loop around the field.
I knew something was wrong when we were at the turn around and my watch said 16:45. Dang, that was one long 1/2 mile I thought. So, as we came up to the grass field, I was thinking I felt pretty bad considering I had to do that loop again. I was completely impressed with Leopold for holding such a strong pace and not giving up.*
That's when I noticed the people up ahead of looked like they were finishing right there- no additional loop. Just to be sure, I kept watching to see if they were actually stopping. (As opposed to running through the finish line and continuing on).
They were! Yay! Sprint to the finish!!
Like that, it was over.
There was a festival afterwards, and a raffle. Sweet, sweet prizes to be had. Graeson won a $100 Gift Certificate for Foot RX, upon which Leopold complained, "Oh, man. He's just gonna buy 50 bags of Sports Beans and get sick." (Consider that permission, Grae!).

There were so many good memories from this race: 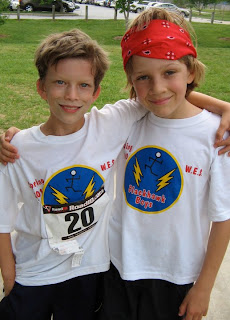 
* I was the worst race buddy EVER. I was asking Leopold if he needed to slow down, get a drink, take a restroom break, go fly fishing, etc. That poor kid. We later decided that when we show up to a race, we're there to do our best, no exceptions, no excuses. MOM.
Posted by Psyche at 7:27 AM

Email ThisBlogThis!Share to TwitterShare to FacebookShare to Pinterest
Labels: Blackhawk Boys, Run For The Hills 5K