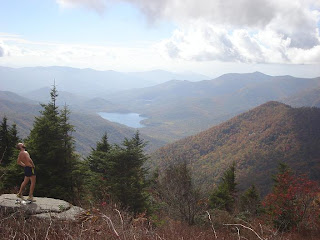 The Pitchell.....what an epic adventure! Birthed by the mind of Mad A (Adam Hill) in 2004, this run starts at midnight on the summit of Mt. Pisgah and you run, hike, and crawl 67 miles (all on the Mtns. to Sea trail) to the finish on the summit of Mt. Mitchell! With its midnight start time and the finicky October weather, this is a beast of a run, and one that's gotten under my skin.

The Pitchell cannot be fully explained by words - it's one of those runs you have to experience (not unlike Sweetwater 50K in that respect). To me, this run represents the perfect storm of difficult trail elements - you've got extremely technical single track trail combined with unholy leaf coverage, unpredictable weather, night running, sleep deprivation, extreme temperature and weather changes, and let's not forget the roughly 30,000 feet of elevation change. Even when you're prepared for each of these elements individually, it's easy to underestiamte their impact as a whole.

I think everybody who attempts the Pitchell 100K+ must come in to the Folk Art Center (FAC) thinking, "How'd THAT happen? Why doI feel like I've been hit by a truck after running the slowest 50K I've ever run?" Then, of course, it hits them: They realize the hardest (or at least slowest/ most unrunnable) 50K they may ever encounter is still ahead of them. See, that's the kicker- this run gets progressively more difficult. The last 20 miles is an ode to denial. It kicks your butt, and even as its happening, you simply can't believe it's that hard- surely you're just having a bad day, or the conditions aren't right, or you didn't get enough long runs in or get enough sleep...

Need I even say this? Very few people have completed this run. It's kind of like The Foothills Trail that way- hard to finish, but in a different way. Since its inception in 2004, the "all time finishers list" includes just 8 names.

Pitchell 100K+ All Time Finishers List
This does not include people who ran but modified the run to make it easier. (For a complete list, go here.)

Well, This Sucks
The day of the race dawned beautiful and temperate and it seemed as if everything were aligning itself to enhance the runners' chances of finishing this beast. There was just one problem- me. I found myself at the tail end of a difficult week, feeling overwhelmed and under prepared. I'd spent the last few weeks moving truck loads of stuff to the new house after working all day, and then working late into the night trying to get some cleaning and painting done. As a result, my running had been erratic at best lately, which only fueled my distemper.

Everyone knows moving is a huge adjustment, but for those of you who know about the new developments in my life, this is just one of several huge life adjustments I'm smack in the middle of. So its not surprising that my dealings with Duke Power and AT & T earlier in the week were enough to send me careening over the edge. I was ready to pick up the phone and dial 1-800-HONEYBADGERNEEDSTHERAPY.

After being so stoked about this run for months, on the way over to Mad A's house on Friday I found myself saying to Charles, "I don't even want to run this race. I wish it could be on some other day because I just cannot get my head in to it right now."

The Usual Suspects Roundup
As planned, the runners began arriving at Mad A's house around 5:00 p.m. Several Georgians were joining the hunt for the illusive finish, including Charles Raffensperger, Sean Blanton, and Eric Loffland. Charles has run most of the individual sections of the Pitchell course already, but Sean "Run Bum" Blanton and Eric Loffland had never been on this trail before. Considering the outcome, this says a lot about both of them.

In addition, many of the usual suspects were running the FAC 50K, which begins at 6:00 a.m. the next morning and goes from the Folk Art Center to Mitchell summit.

Whip My Hair!
For me, the evening at Mad A's was the absolute highlight of this year's Pitchell. Pre-run get togethers are always fun, but hanging out with the likes of Matt Kirk, Adam Hill, and Crimson Cheetah...well, that just takes things to a whole other level. I'm not ashamed to say I still get a little star struck amidst their company. 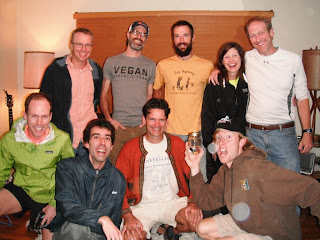 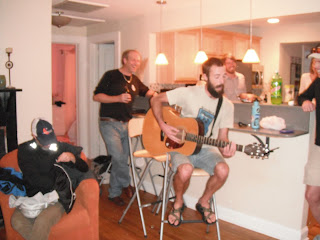 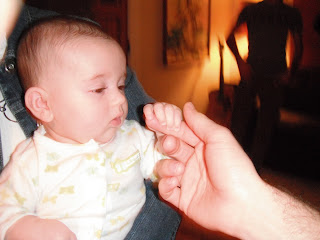 Most special bonus- Meeting Ava for the first time!


It's the PITCHELL, Baby!
Things move fast. Before I knew it, we were at the top of Mt. Pisgah and it was just before midnight. I was happy that Charles got to experience this part of the run- the midnight start really is very special. 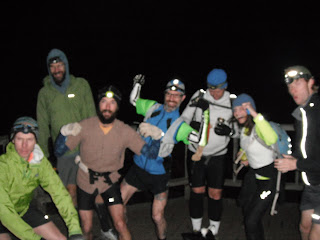 In my humble opinion, all super badass runs need to start at midnight with a sip of Moonshine and a howl at the moon...

Well, this is where this post becomes painfully anti-climatic. I'd like to say that everything turned around for me, I started feeling great, I had an awesome run, and I finished in an amazing time. Sadly, no. From the moment we began, I felt as if I just didn't want to be there. In fact, it's fair to say that I was simply waiting for Charles to give the tiniest hint that he wasn't in to the run, either, and I'd be all over that shit, saying I could totally quit and be fine with it.

Unfortunately I had a 43-mile wait for that to happen. We decided to end our quest at Craven's Gap, knowing we would not summit until well into the dark. We'd had enough, time to call it a day.

Some highlights of those 43 miles include: 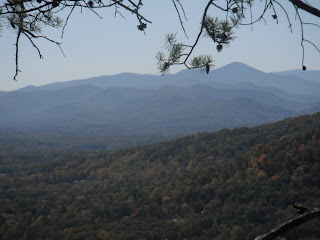 Climbing away from the FAC, you get a terrific view of Pisgah and you see how far you've come 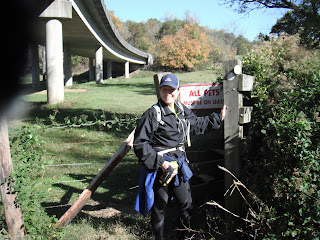 Right before FAC, the trail takes you under a freeway pass, but you're running through a pasture, complete with cows. It's surreal. Especially after running all night. 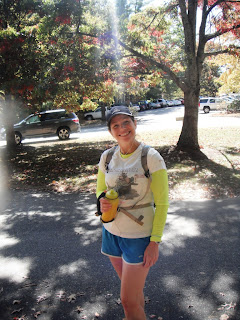 Just completed a 11 hour 50K, took a 45-min. rest, shared a 22 oz. IPA from Green Flash brewery with Charles, and chatted with Jeremy Hargroves before taking off again. No wonder I'm smiling!

We started running down the BRP back to my car, and suddenly we hear someone yelling something from a moving car. The car pulls over to the side of the Parkway and at first, I think its just another of theose insane leaf lookers. They are CRAZY and will slam on their brakes at the first sign of a brightly colored leaf. But I turn around, and there's Terry Foxworth, standing on the Parkway railing, yelling, "PITCHELL SUUUUUUUUCKS!!!"

Aaaaagh...!!! A kindred spirit! What a wonderful and welcome sight!

Terry explained that he and Dave were both simply not in to it from the beginning, but they decided to finish a 50K and stop at FAC. Hearing this made me feel infinitely better about my day. By way of an update, Terry said that Adam was going strong but had run into a rough patch and was slowing down. Still, it was 3:00 in the afternoon, and he was approaching Mitchell. Beast!!

As far as the other runners, Brad Kee was not far behind Adam and B-Rex was still going strong, although he may have taken an alternate route. I heard something about Sultan taking a nap, and then dropping later. Cheetah had dropped at a nice even 40 miles. However, Terry said that no one had seen or heard anything from Sean and Eric, and this kind of concerned me because they had never been on this trail.

So, Nicole and Terry gave Charles a ride back to my car and Charles came back and picked me up. We drove up to the Mitchell summit to see if there were any finishers and any news on Eric and Sean. 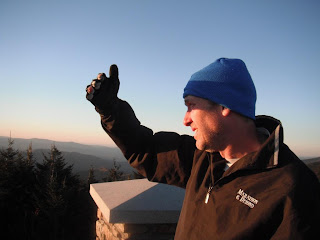 Beginnings of a beautiful sunset atop Mitchell. ..Trying to not be worried about our boys.


So we wait...and wait...and wait. Still, no one has heard or seen from Eric or Sean. Charles and I were both worried and we stayed up at Mitchell, watching and waiting. At about 7:30, with dark approaching, and the winds picking up speed, we thought we better contact the Ranger and let him know the situation (becauae Rangers love hearing that runners are out there lost on the trail, and we like to make them happy). They close the gate at 8:00, so if Sean and Eric were to make it up there to the parking lot, they'd have no way to get to their car. Not knowing what shape they'd be in, we decided to wait it out.

We kept driving down Hwy 128 to see if we could find them lower on the trail, then we'd go back up to the summit parking lot. Back and forth, back and forth...where ARE these guys?

To my amazement, Charles can perfectly imitate Run Bum's voice, and we spent some time cracking up at the expense of our spirited young friend. That's just how we roll, baby.

We were actually laughing so hard we were crying quite worried, and when FINALLY the Ranger came around and told us our friends were in the Ranger's bathroom getting warm, we immediately wondered if we'd find them in some compromising position were so very relieved!! We headed over and Charles rounded the boys up and put them in the car and gave them some food.

We heard their story (complete with how they "held up" some tourists for food), and were simply amazed and inspired by their journey to Mitchell. They are both amazing and talented runners, and it was an honor to be a part of their journey on that day. 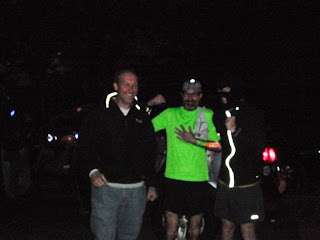 Charles, Eric and Run Bum (in ski mask) hamming it up- We're so happy they're safe!

To get the full low-down on their journey to Mitchell, go here: Run Bum's Pitchell Report

And you MUST check THIS out:

In conclusion, the Pitchell is....an EPIC ADVENTURE. It's not for everyone, and there is definitely an element of danger. But after this day, I want to complete the run from Pisgah to Mitchell more than ever. In my future, I want to be able to say I ran from here to there...Yes, I'm one of "those" people.

** This year's date for the "real" Pitchell- as opposed to a PussyKitty Cat Pitchell whereby you start early. However, this year's attempt made it very clear to me just how dangerous it can be to end up at Mitchell after dark. The weather conditions change on a drop of a hat. For that reason, I think a midnight start is out of the question for me in the future, since you need to be sub-20 hr. in order to finish in daylight.