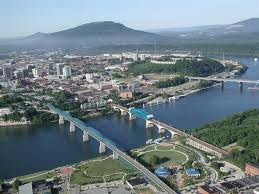 Wherein I fall in love with Chattanooga, TN (and Lookout Mountain in particular) and experience one mutha of an HTFU run.
The Lookout Mountain 50 Mile Trail Race came and went, leaving in its wake one sore, beat down runner who is better off for having had the experience.
The race. Originating from the Lookout 100K, this 50 miler is run on the easily accessible, yet remote trails of Lookout Mountain and features such classic sites such as Cravens House, Scoca Springs, Lula Lake, the Covenant College cross country course, and the historical Civil War Lookout.

The Course: The run starts at the top of Lookout Mountain at Covenant College. Runners are sent along two exposed bluff lines for approximately 6 miles with fantastic views (some in the park and some in the land trust). On one section of trail, it's possible to see 5 states on a clear day. The trail continues along Lookout Creek and later Rock Creek. The terrain is technical and very steep in some parts, yet very runnable in other parts. The views are expansive and very rewarding. At one point, the climb is so steep you find yourself hoisting yourself up the side of the mountain with a rope that has been provided. It's a difficult course.

Covenant College (seriously, who gets to go to school here?)
Here's how it all unfolded: Just one week post-Bartram 100, I met up with Charles in Chattanooga at the mandatory pre-race meeting and packet pick-up. (The race packet goodies were excellent: Patagonia tech tee and North Face arm warmers). Our plan for this race was to simply view this course and get some miles on tired legs. Honestly, I was not sure I would be able to run at all, as I was still feeling the effects of Bartram's parting twin gifts of achilles and peroneal tendon pain. I decided to wait until the morning of the race to decide what to do. I also took several ibuprofen, which I had failed to take all week, hoping my body would handle the inflammation on its own.

Funny story. Very early race morning, I awoke with dry, irritated, red eyes. I went in to the bathroom to take my contacts out, only to realize I'd forgotten to bring my contact carrier. Half asleep, I placed my contacts in a plastic cup with a little water in it. A few hours later, I found myself laughing as I looked in to an empty cup! My first thought was that Charles had "drank" my contacts, but it turned out he had glanced at the water, intending to take a drink, but not knowing how long the water had been sitting there, he had dumped it down the sink. (Yes- we tried to fish the contacts out of the drain catch. No go).

Pre Race. As we headed out to Covenant College for the 7:30 start, I noticed the ibuprofen seemed to be doing its work and my ankle was feeling a lot better. I thought if I nursed it along nice and easy, I would be able to at least cover the distance and see this beautiful course. Against all better judgement, I was willing to give it a try. 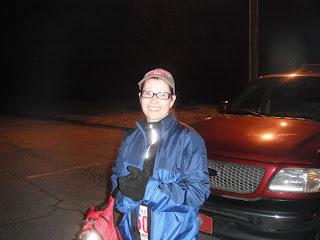 Psyche's ready to edit some contracts run this mutha. 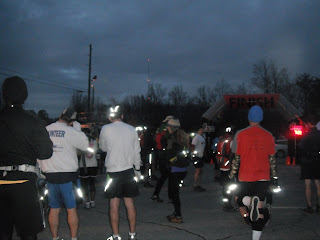 In white, father and son team, Bob Sr. and Bob Jr. (who we would later mistake as sweeps)

And, they're off. For the first 6 or 7 miles we folowed this amazing bluff with an incredible view of Chattanooga down below and large rock formations jutting upwards about 80 feet above us. We cruised along with everyone for awhile, making small talk, and joking around. I had tagged the guy I was talking to as "Clemson" because he went to school there, but luckily he told me his name was Carl before leaving me in the dust. I also chatted with a lady named Joy as we cruised down the bluff, going below the Lookout Mountain tourist overlook and then making our way down to a gravel service road as we neared the first aid station. This was Joy's first attempt at he 50 mile distance. 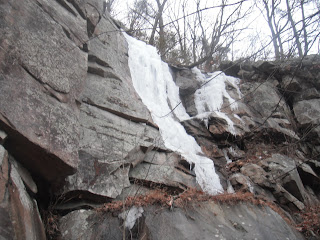 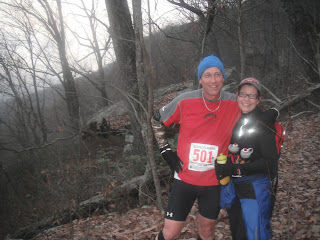 Thanks to the runner who offered to take this pic

I was feeling OK at this point, but all the signs of that soon changing were there. Every slanted bit of trail was a strain on the tendon of my outside ankle. I was favoring one side, which compounded the whole situation. I would soon have an assortment of other aches and pains that had to be dealth with. Taking off from the first aid station, Joy was in and out of our sights as we continued to travel down until we ran along a creek for a distance. Eventually we eventually hit aid station #2 around mile 15. My new AS friend, the banana man, gave me encouragement and we both remarked at how someone really ought to bring a foam roller to these events.

As we left AS #2, we began to climb straight up, cutting through a power line section and then through more of the woods, eventually hitting a series of switch backs. Up and up we went, with the ridge line getting closer and closer. Climbing actually lessened the pain of some things, but worsened the groin and quad pain. By this time, I was most definitely struggling, and limping as well. The achilles and peroneal tendon pain had found some new friends named IT band pain and hip flexor pain. Now it was a party. At this point, I just had my sights set on finishing. As we came out of the tree line, we came into a clearing, crossed the road, and found ourselves back at the start/finish area. 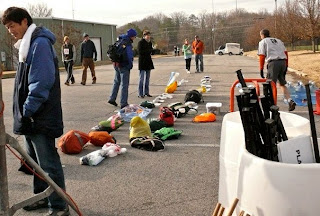 After getting some soup, stretching, and begging the trail gods for mercy, we left the start/finish area and headed down the trail on the southside of Lookout Mountain. This trail would wind down towards a creek, come out into a muddy powerline section and then go back into the woods for a long, descent to the Lula Lake aid station at mile 28.

Another funny story. We were aware that the race was enforcing cut off times, and since we had slowed down tremendously we were on the lookout for the sweepers. We had mistakenly identified a father and son team from Florida as "sweeps" because they had on white shirts and one of the shirts said, "Volunteer" on the back. They followed us for a few miles, invoking paranoia, before it dawned on us that they were just racers. My first tip off was hearing Bob Sr. say 1) he had run out of water and 2) that they had not prepared well for the hills.
The next six miles was a virtual rollercoaster with several changes in terrain. The trail followed a creek for a while, then a woodsy, rolling section, then along what look like some kind of bird sanctuary area that spit you out at Lula Falls. We stopped here to take in the fantastic view of the gorge. Lula Falls is beautiful and even with the icicles on the edges of the falls, the water was rushing down into the gorge below. 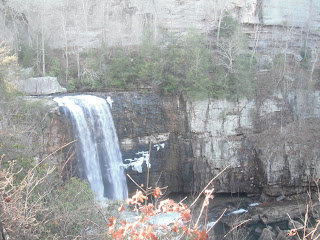 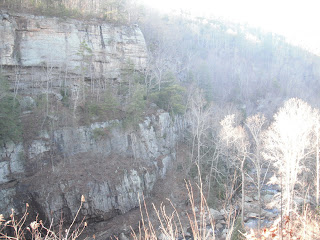 Base of Lula Falls 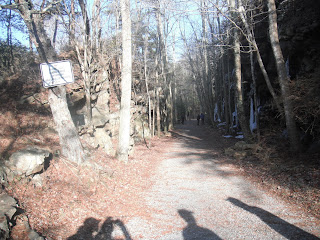 Shadow people, get ready to climb!
Leaving the falls behind, we soon came to a short but very steep section that some one had laid out ropes for us to use. Getting up this hill was nothing short of tortuous pain on my ankle. I'm still waiting for that protective mechanism of the mind to kick in, you know, the one that makes the most painful memories fade away.
Just past the climb, we came out on to a ridge with great views. We followed this ridgeline for a couple of miles until we then had to descend again. This brought us down by a creek and the trail wound its way along it. I believe this is where :
1) I thought the trail would simply never end
2) I ran out of curse words to describe the wicked slant of this trail
2) We picked up the "true" sweeper, a sweetheart, named Leigh
Soon, we started to see the front runners* heading back our way. We saw the leader, Troy Shelhamer, who looked really good and fresh. It wasn't hard to guess that he would hold onto to his lead. We exchanged words of encouragement and it would be a while before we saw the second place runner. After a bit, we saw someone we recognized - Byron Backer! He stopped and said hello, and he was looking very strong- we were very happy for him.

Not soon enough, we finally came to the aid station at mile 34.5. Even though I was hurting beyond belief at this point, I was still disappointed to hear we had missed the cut off by more than 10 minutes and we were being pulled. 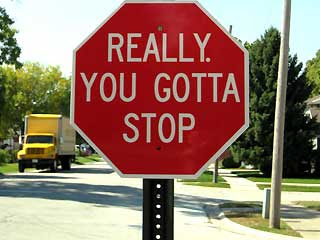 Looking back, Lookout Mountain was a great experience even though we didn't make it past the 34.5 cut off . The experience reminds me that learning to race badly is just as important as learning to race well. (The road to great races and PR's being paved with all those crappy runs, and all that). Besides, the car ride back itself was worth all the pain ---We answered the penultimate question: How many ultrarunners can you stuff into a subcompact at one time?

With 2010 coming to a close I want to take a moment to thank everyone who bothered to peruse any of my 92 blog entries during the past 52 weeks. I consider it a privilege to graze in your presence with such meager credentials, and I only hope that you found a paragraph (or two) useful or amusing.

Over time this blog has become quite the compost of all things trail running, complete with incriminating evidence and race reports that, when revisited, read more like a midlife crisis than anectdotal dispatch from the field. This year, I've I've had the supreme pleasure of being humbled and liberated by both trail and trail runner, all while deliberately putting myself in harm’s way on the insistence of my ego and for the pure lack of better judgment. No doubt, 2011 will see more of the same as I fully immerse myself in my midlife crisis. Rock on.

I wish everyone a safe and happy new years and thank you all for making my 2010 the best year ever. I am a very lucky girl.
* Congrats to Sarah Woerner for ripping it up wit an 8:51 new course record.
Posted by Psyche at 11:20 AM