I was in Barnes and Nobles earlier this week with Leopold. It's been awhile since I've been in a book store and I automatically gravitated to the sports section to see if there were any new, interesting titles about running, or better yet, ultrarunning.
Then I had to laugh because I realized that I am so far beyond turning to a book for something new and exciting to absorb about running that it's not even funny. Are you freaking kidding me? I was in the BARKLEY last month. I'm gearing up for VOL STATE, a 500K across Tennessee in JULY. That's right...I'm one of those people now. There is nothing a book can ever offer me again. How wild is that?

Although I'll never abandon the core principles of training, gone are the traditional training plans- at least for the runs I'm really excited about. Good thing, too, because where the hell would I find a training plan for a 500K? You train for that by doing it.

Which brings me to my subject matter. Look at this wild man: 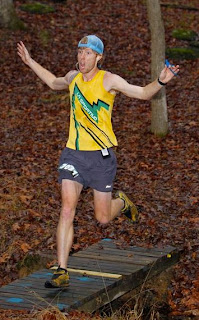 On Saturday, Charles and I had the complete privilege of sharing the trail with Sean Cien Fuegosthechisel Blanton on one of the most difficult sections of the AT (Fontana Dam to Clingman's Dome) as he attempted his speed record.  33 miles of incredible trail with huge climbs and some great views on the ridge lines... What an adventure!  SCAR is the real deal and we didn't even cover 1/2 of it.

We knew we were in for a special day when we first set out, and as we walked across the bridge we met this Belgian dude. He looked like a serious (sponsored by New Balance) athlete and he was doing a speed workout. We asked him if he had come from the trail (or something like that- Run Bum is just amazing with people. He can strike up a conversation with anyone). Anyway, the guy was strikingly modest and he casually says, "No..Just a training run."

"What are you training for?" Sean asks. And this is the part that I'll always remember- Without hesitation, and with incredible fire in his eyes he says, "A four minute mile."  The flash subsides and I wonder if I ever saw it in the first place. He matter of factly tells us, "I ran 4:01 last year, so I will train for sub-4, hoping to run 4 minutes flat." Holy crap, I thought. I fully believe he will do it. "Damn. This is going to be a great day."
And it was.

Charles "paced" our friend the entire section of trail, while I went in about 4 miles at Fontana Dam and then turned around. I took the car over to Clingman's Dome and ran in 7.5 miles to bring in food and water. It was a long day, but the fact we were helping Sean (if only by keeping him company and trying to keep his mind off his stomach and GI problems) made the day feel special.

It was an absolute nightmare to climb the hill to Clingman's Dome. It's like being smacked down by the Hulk (yes, I just saw The Avengers).

The weather had turned cold and windy and ugly, and we were all freezing and exhausted. There was no way Sean could cover the section to Newfound Gap and we all crawled in our vehicles- done for the day, cared for and tended to by Denise. Exhausted but grateful for the experience.

It's been a long time since a run took it out of me like the 23 miles I ran that day did. I was slumped over in the car asleep not 5 minutes after we left the parking lot. I felt bad because Charles had run 10 more miles than I had AND he had to drive.

All I can say is that I am grateful beyond belief to have met the people I have through ultra running and to continue to be connected to a sport so pure- it truly brings out the best in people. Sean Blanton is a talented runner, but I admire his adventurous spirit- how he truly lives life fully, on the edge, with no regrets.

You'll get it next time, little brother. No worries.